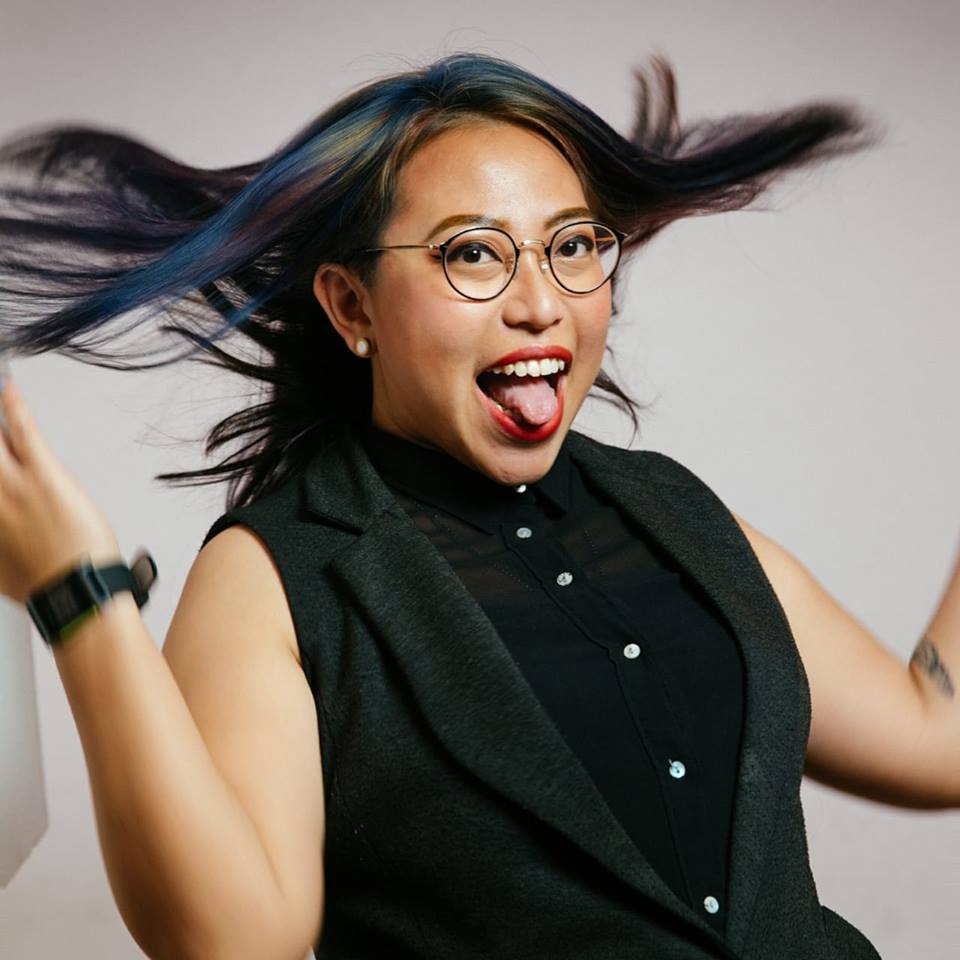 (Cyn is an old friend that I met via the Singapore music scene, a full 10+ years ago. We used to talk on MSN Messenger, and we had a common interest in growing the local music scene. I’ve always admired her initiative and pro-social attitude. Unsurprisingly, she was quick to volunteer to participate in this project.)

So, we’re sitting down to do an interview. What’s something you wanna talk about?

Well, i would generally talk about feminism and sustainable living generally. That’s what people come to talk to me about. I love preaching about menstrual cups and how it liberates women physically.

Like, feminism isn’t just about equality and breaking psychological restrains – like society, and how we were brought up, and having fucked up mentalities — but also physical ones.

Nice, how did you get around to that?

I guess the way I am, I often raise it up in the middle of conversations. Like either ’cause I avoid using disposables if I can, especially when I start a new job and people start to observe it. Then I talk about it.

I mean, how did you end up in a position where you find yourself being an advocate for it?

Ahhh, usually when girls wanna go get a pad or something, I would talk about it. I got curious, I bought it, and loved it. Now I can’t shut up about it. And also I’m always on IG talking about this stuff.

Usually when I meet cool girls, I wanna introduce them to menstrual cups ’cause I feel that’s like the one thing that they need to complete the whole ‘liberated woman’ kinda vibe.

But… i’m not gonna waste my time with girls who have issues touching even their own vag.

So do you like, evaluate each person? “Hmm will she get it or nah?”

Hmmm, I guess yes. I’m like a salesman, right, you look for an angle in. Interesting that you ask it like this in detail, I’ve never thought about it.

If I feel like it, I ask it. For my close girl friends, I just buy it for them as a present, hahahaha.

How many people have you converted at this point?

I think quite a good number, maybe a bit more than 10? I got a male friend who got his wife to try it and they made a journey video about it.

But I mean, it’s not about KPIs, like who converted… sometimes the idea just needs to be seeded. Then people will slowly do it. It’s being vocal, and friends will come to you for such things. I’m also a huge advocate for sexual liberation for females, safety rather than taboo.

I don’t have statistics on-hand, but many girls generally never touched themselves until they got touched by someone else first. It’s the same for me. It’s just so sad.

Also, why is it so fucking hard to get a fucking Plan B in Singapore? I’ve got butch friends who didn’t get their vag itch taken seriously because the docs don’t consider their sex as sex, ’cause there’s no penis involved. And they gotta go find a lesbian doc to be taken seriously.

This needs to stop. We’re so liberal and yet not liberal at the same time… It’s weird. We think we’re in post-feminism in SG, but it is not.

SG has such a long way to go.

Ya. It’s almost as tricky as the statement, “There is racial harmony in SG.” And like, not enough Chinese people are speaking out on Chinese privilege. I didn’t really know about it until I started having friends of other races. It doesn’t really count if their skin is lighter, too.

So like, I’ve got all these wild things I go on about 1 to 1, but I don’t really know how to structure it into a proper blog, or like, videos…

I can help you out! […] How did you get into heavy metal again?

Well it’s my birthright. My dad’s into it. His band mates are. So… 18-year-old me wanted to do a metal fest, it was a nutter idea. It didn’t happen, but I realised that there’s an area that can be ‘fixed’, so to speak.

So I just started a Facebook group and then just collected all the metalheads in SG, try to hang out, go to gigs together. Then after that started a blog with the rest of my mates to host the interviews, the reviews and that became Heavy Metal Tribune.

It’s not doing very well locally, but the engagement is pretty high especially in the USA and Scandinavian countries. It’s got a lot of potential really, but we’re just kinda lazy, haha.

Wah, your dad’s a metalhead? Did he play it at home when you were a kid?

Well he’s not a metalhead, he’s a rich boy with guitars, into hongkong rock. So he used to when he was younger. Yeah, like canto rock. Beyond and stuff. Let me introduce you to some. It’s phenomenal.

They remind me a lot of a mellower version of X Japan. Same thing, they lost their guitarist due to a freak stage incident. And then the singer is a brother…

It’s so sad, and the songs are almost prophetic ’cause they sang about good times and brotherhood. And also it’s one of those popular songs with chinese gangs, lol.

It’s interesting to me that you took the initiative to organize. Not many people do that.

Yeah I know! My problem is to sustain the effort, aha. I’m good at gathering and rallying people. and then i need a project manager to settle the nitty gritty. that’s like my day job too hahahha

Yeah, I’m good at that. But the actual execution I’m not too good at.

Actually what are you doing now for work?

Same lol. Did u meet my friend Hongrui? He’s the other HMT boss. He’s great at getting people to do the actual work.

So I’m the one who will talk to new people, get some wayang things like PR and marcom, then I will assign someone else to continue from there. That’s a very typical sales/account manager role in an agency, hahaha.

It’s interesting because HMT helped me find out what I’m good at for a day job, too.

That’s so cool, actually. I got into my last job because of my blog. And i expect to get my next job (if I even get a job) through all the nonsense I’m currently doing.

I don’t know about you, but trying to find what you do for a living is not easy and it’s the source of my negative emotions. At the same time, all this ‘nonsense’ we do really nourish our souls.

So I’m hoping by next year, age 30 to 35, I hope to slowly be doing something for myself. Something like HMT. Slogging for someone else is just not my shit.

Wait, what’s the source of your negative emotions…?

I don’t quite know to express it properly, but in short it’s like — though I’m good at what I’m doing, it’s not my calling?

Ah, I feel you! I spent 5.5 years at my last job, which was 3-4 years longer than I expected to. It was such a great working environment and I loved my boss — and yet towards the end of it, I was going through the motions and feeling blank and spiritually exhausted.

YES! That’s what I mean, exactly. I think its an unidentified mental problem, hahaha. Like, just a very ‘void’ kinda feeling.

Now I’ve just jumped into another job, and I think I will do well, but I just don’t really have that motivation to soldier on.

Ya. Hurhur, but I don’t wanna do that ’cause I can’t afford myself, hahahaha.

The big dream is to be able to do it indefinitely. But “realistically”…

Thats what the boomers say – millennials are very frivolous, that they like to “Eat Pray Love,” that kinda shit.

The last time i did this, I was training to be a barista. I was 25. It was so liberating. At 5pm I finish my work, and I sleep well every day. And then on my one off day, me and my colleagues would go to Pulau Ubin. It was so fun and carefree.

What’s not fun is seeing my peers being bankers, earning cool shit and carrying nice bags when I don’t even have $5,000 in savings. Cause my pay was essentially $1.7k as a waitress. But it was so nice. Every morning i sell coffee and food that i sincerely love.

I have a few things like that I imagine I’d love. Once I seriously considered becoming a scuba diving instructor.

AHHAHA I know what you mean. I thought I got it out of my system, and i went back into my day jobs, and then now I’m feeling like this again. I just wanna be a bartender or some shit, lol. Wtf is wrong with me?

I also toyed with the idea of being a life coach, lol. What a fraud. I’ve been told by my friends and colleagues that it’s very illuminating and motivating to talk to me. And also maybe like a sexologist. But there’s no market for that in Singapore lah. Life coach, maybe.

That’s great! I should talk to you more then.

Hahahah go for it. We used to text a lot in MSN days!

I’m still curious about the organizing that you did. like I know you’re good at it, but how did you start?

It’s just Facebook, man. Also i was a lot more confident and hot at 20, lol. It was very easy.

I think I’m confident in a different manner. Like I feel that at work, people don’t really care if you’re hot – just whether you can do the job.

And in fact it’s good to not be hot at work. Last time I’d get harassed by my clients or boss, and it’s supposed to be funny. No its not.